Glenn’s Review of Travels with Puff 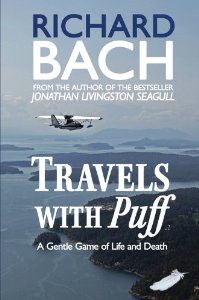 On January 1st, 1967, I woke up with the worst hangover of my young life and realized I was well on my way to alcoholism – unless I came up with a goal … a dream … an impossible quest, if you like. The only problem was, I couldn’t think of anything. So I got into my car, drove to the only convenience store open on that long-ago New Year’s Day and poured over the racks of magazines in search of an answer. I spotted a copy of Flying, pulled it down, and watched it fall open on an article by a writer named Richard Bach. Within days, I discovered Bach was also a writer of books and as I devoured copies of his now-classic aviation tales, “Stranger to the Ground,” “Biplane,” along with stories of his adventures as a 1920’s style “Barnstormer” in the extraordinary “Nothing By Chance,” I fell in love with Flying.

By the end of that year, I was a licensed pilot. A few years later, I had my own airplane, and by 1971, a rare antique biplane in which my partner and I barnstormed from coast to coast across North America. Even more amazing – Michelle and I had the incredible honour of becoming friends with Bach in the years before the world discovered him by way of his immortal classic “Jonathan Livingston Seagull” (one of the best-selling books of all time!)

But as much as JLS, and the books that followed (Illusions, One, The Bridge Across Forever, etc.) made Bach known around the world (and recently placed him at #13 in the list of top 100 “Spiritual Leaders” alive today), there was a group of his original aviation fans who deeply missed “their writer;” the man who expressed – better than anyone they knew – what it means to be a pilot; experiencing the ultimate freedom of being aloft in the vast blue sky, in your very own airplane.

Well after reading “Travels With Puff,” I can honestly tell my fellow-pilots: “Bach Is Back” and in a big way. TWP tells the story of Bach’s journey across America as he flies his beloved amphibious ultralight (named “Puff” [or so she tells him]) from Florida to her new home on the N.W. Pacific coast. There are echoes of “Biplane” & “Nothing By Chance” in this book, but this time the trip is made in the company of Richard’s friend Dan Nickens, flying “Jennifer” (sister to “Puff”). And – fortunately for us – Dan just happened to bring along his camera (and an incredible “Photographer’s Eye”).

The results are a magical blend of words and images that take readers along in such a personal way that you could almost swear you’d been sitting in the passenger seat as these two tiny aircraft took on the continent. Because the ability of these little Flying Machines to land and take off in absurdly short distances – on land or on water – allowed their pilots to explore places unreachable by any other form of transportation.

But this is no travelogue. With Bach as author, you know that each leg of the journey – every adventure – any incident – is going to be subjected to the same dissecting insight we’ve come to expect since Jonathan L. Seagull first took to the air.

This may be “a Pilot’s Book” in some ways, but there is more than enough Bachian Philosophy in these pages to delight and inspire any of Richard’s “non-flying fans.”
For in the end, “Travels With Puff” turns out to be a love story … between a man, his airplane, and the sky.

And I can’t help but feel there will be other teenage hands accidentally stumbling onto this book, eyes devouring the contents as their own deep-buried urges are pulled to the surface, its words launching a whole new generation into the penultimate freedom, which can only be experienced by “living in the sky.”

If you feel something is missing from your life – that it must be possible to still find true freedom somewhere on this over-populated planet … Richard Bach may have a few ideas for you to consider. He started me on that journey more than four decades ago, and I sincerely hope you may be one of the lucky souls who find wings of your own so you can leap into the sky and soar through this life, gazing in wonder as our staggeringly-beautiful planet rolls slowly by beneath you.