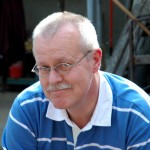 Since I am now part of the Why Fly Team, I might as well bore you, our readers, with my own little column. And please don’t expect me to turn out literary miracles like Michelle or Glenn. First, English is not my mother tongue. Second, I am not a licensed pilot. Fortunately Glenn IS a licensed pilot and also a licensed Editor. So he’ll cut my blabbering in half and present you with the remainder. Or not, as the case may be.

So what’s an armchair pilot?

Or, come to think of it, why would I want to write about that?

‘Armchair Pilots’ are what many flightsimmers call themselves. They ‘fly’ on a monitor (TV screen) attached to a desktop computer. Using, predominantly, Microsoft’s Flight Simulator, they can mimic real flight, learn manoeuvres, practice, or just fantasize about being a pilot … from the chair at their desk … and, sometimes, from a more-than-real, home-built-cockpit!!

For the most part these people cannot fly a real aircraft for a number of reasons. Money is one. Age and/or insufficient health are another. Or lack of time. Or lack of (family) support. Even fear of heights! There are many reasons why people stick, or turn to, PC flight simulation instead of practicing ‘the real deal’ to get themselves at bird level.

I know, since I am one of them. Sort of.

I am lucky as I HAVE been able to fly quite a lot, for real. I HAVE taken off in a small airplane – several in fact.  I have flown around the skies of many countries, and I’ve even landed a few times … myself. In fact, so far I have landed every time I went up (in some way or another).

But I know of many flightsimmers who have never flown in a real aircraft. And many of them are very knowledgeable individuals who sometimes know more about flying than real pilots, believe it or not.

Most of these ‘simmers’ are very interested in the world of real aviation, in whatever form or level. And that is also one of the reasons I have spent most of my adult life trying to somehow ‘link’ the real world and the simulated one.

I have always been a strong defender for both sets of skills. Just because one does not have the means, physical ability or opportunity to learn to fly for real, doesn’t make him, or her, a lesser aviation FAN! Nor does being a real pilot make you a better one.

What does matter is having a passion for aviation – be it virtual or real.

Since that’s what has brought you (and me) to Why Fly, and will hopefully keep you coming back, that too is why I’ll keep writing my columns here (and elsewhere).

About the joy of flying we ALL share … in one way or other.

My home based ‘Cessna’